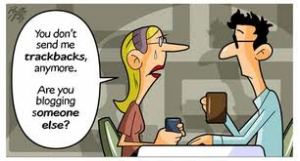 Over at TDB, we hold the belief that the review site is a resource not necessarily an interactive community. It’s nice to have those communities, blogs and sites where you can gather, chit chat and comment back and forth. However, over there we wanted more so a repository of reviews for people to reference and use in their book buying instead of a site that requires a lot of time, effort, and comments. Nothing bad with either one and there is room for both.

Part of the reason for this is that is how I set up my initial LJ site. I never counted on getting readers nor did I really target a lot of readership and promotion. I definitely saw an increase in comments on opinion topics and occasionally someone would pop over to comment on reviews – usually a fellow reviewer if I’d been diligent about commenting on their site in a kind of quid pro quo. That’s fine and actually allowed me to post or not post depending on my own time and interest. I continued to post reviews almost every day.

That same philosophy carries over to the WP site and I do enjoy comments. It’s nice that someone cares enough to say something but a trend I find among a lot of blogs are that

reviews don’t get a lot of comments. There are the huge meta sites that are more communities and offer so many posts that people tend to comment on absolutely everything. These are very interactive sites with tons of visitors, massive book giveaways and so on.

For those of us along the blog reviewing trend, several may get comments on the daily fun posts or the opinion pieces but even their reviews get few comments. Some reviewers have said on twitter that if they don’t get comments, they feel like they’ve failed. I would have given up by now if I felt that way (no snickering from the peanut gallery).

I have to applaud those that carefully tailor their content to be the easiest, the most attractive and the most thought provoking to garner attention and furthermore comments. That’s a special kind of effort and dedication. For my little corner of the world, I’m happy if people stop by, if you want to comment, go at it. If you’re too busy I get that. I can barely keep up with my google reader list (often has 400+ unread posts) so I understand and appreciate people are too busy.

Thank you to anyone who’s taken the time to comment and if you haven’t, well you don’t get cookies but thank you for viewing anyway.
Oh and if you’re some of those who were searching for “Justin Timberlake accident” – you’re SO in the wrong place.