So I’ve been seeing this trend “throwback thursday – tbt” on blogs now for a while and I’ll be honest, I always thought it was ridiculous. Kind of campy and silly, something best avoided, especially when it involves pictures of people in their youth. Seriously – that is NEVER a good look.

However I’ve recently been thinking it would be fun to revisit old books, but I’m not always doing it on Thursday. Such a rebel. And much to my dismay in this genre or any genre, stories over 2 years old seems ancient, old, and decrepit.

How sad is that?!

With these recent posts (mine , Jen’s, and Tam’s) in mind, I decided I’d do a few throwback posts of my own. This format is open to change whenever my laziness, busy schedule, or wandering interest are factored in, but for now I’m hoping to highlight older reviews. I’ll also be re-reading several books. I may even review some of them as I don’t have reviews for all of my favorite books.

Sometimes I get stuck in a rut of always reading new books. I feel like m/m is my review genre so almost everything I read has to be something for review. It takes out some of the fun of reading. So instead of re-reviewing a book, I want to see how my old reviews compare and hold up. Plus it’ll shed some light on some truly great books that get forgotten within short amounts of time.

Total side note – I wonder if authors get frustrated that all their immense hard work gets shuffled to a book graveyard so soon? 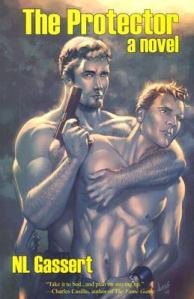 The Protector by N.L. Gassert
My Rating: 4 out of 5 stars

This is the only book NL Gassert has published (WHY!) and it was a great debut. I’m still waiting that someday she’ll publish     something again. Or I’ll find out that she’s publishing under another name (so popular). Either way, I still hope for more from Gassert. I ran a giveaway when I initially wrote my review and maybe if anyone’s interested I’ll do another one. I’m thinking of re-reading it as my own review has me excited about it.

For anyone that missed it the first time around or anyone who cares, here’s what I had to say about it.

This is the kind of fast paced, well-written action story that is instantly engaging and completely entertaining. The tight plot and well-paced story may stumble occasionally but that only adds to its appeal. The first installment of what promises to be a new series only scratches the surface of interesting characters and introduces a wealth of possibilities for future adventures. Not surprising this was a Lambda Award finalist and well deserving the recognition. Although this isn’t a mystery, all the bad guys are introduced early, the action from the beginning to the end is well thought out and enjoyable, almost more so than the romance aspect. Be sure to start this series now before the second installment comes out, you won’t want to miss it.

The premise of the book hinges on Soren, the son of a local crime boss, as he goes into hiding after a particularly brutal beating from his father. Although the FBI is reluctant to help Soren, they do set him up with a bodyguard of sorts in ex-ranger Mason. Mason and Soren are supposed to head out to sea away from the chaos in their wake but plans go awry soon after they’ve left. In the ensuing action, Soren must re-evaluate his life and choices while terrorists and angry fathers threaten his life.

The story begins with Soren being handed over to Mason for safekeeping and the two butt heads immediately. Soren’s spoiled life of privilege, alcohol, and drugs is at odds with Mason’s almost puritanical sensibilities. Although the two clash often, there is a surprising amount of mutual respect. Mason is able to see beyond the image and pampered life Soren has led to hidden strength even Soren doubts exist. This faith and belief in Soren is essential to helping him mature and grow over the course of the book. Soren never loses his wit and sense of humor through his trials, even accepting the abuse as the price for his easy lifestyle. It takes a considerable amount of force and Mason’s unwavering support for Soren to move beyond his empty life. Soren’s motivation and desire to prove Mason’s belief in him is not misplaced is the real driving force for change and maturity, more so than even the numerous and painful beatings he receives.

Soren is a great character, even as he frustrates for well over half the story. His inability to change his pattern of behavior and poor decision making almost predict bad things will happen. I was hard pressed to feel too sorry for him when his inevitable stupid choices led to dire consequences. However, his charm is also evident in his continued self-evaluation and hard work for positive change, even as he slips backward a few times. These aspects of his personality kept Soren from being too annoying and leave a character on the verge of so much possibility in future stories. Soren is a wonderfully flawed and genuine character that struggles against taking the easy life he’s been provided and developing his own identity and independence. He’s far from a weak character but has honest flaws and can admit to taking the easy road in his life up until now.

The relationship portion of the book certainly suffers for the action element. Mason and Soren dance around each other for the majority as Soren comes to terms with his first gay experience rather easily but Mason has some trepidation about the younger man. Soren’s flaws are balanced by Mason’s inherent goodness, creating an interesting dynamic between the two. That is not to say the romance is unsatisfying, as the slow bloom of emotions and connection is fierce, fiery, and explosive. The delicious tension mounts and provides some great scenes of sensuality. Although this is less important than the action/adventure theme, the relationship is no less developed or thought out.

Mason is perhaps a less well-developed character than Soren, though no less interesting, as he and others exist as a support system for Soren. This is really Soren’s story and his maturity while facing the consequences of his lifestyle and choices. Mason is a good balance for Soren’s poor decisions and helping the story is Mason’s twin brother, Stoney. Stoney is sure to have a book of his own as the dynamic character almost steals scenes. The other secondary characters such as Soren’s father, James, and his ex-girlfriend, Jolina, are both somewhat stereotypical without much depth beyond the obvious evil façade. Even so, they are solid characters without dipping too far into the classic bad guy tropes and keep from being annoying with snappy dialogue and fast paced action.

The story itself is mostly action and slips into almost non-stop sequences once the setup and characters are introduced. The quick story is entertaining and well written with only a few holes in logic and circumstance. Most notable is the final action sequence that comes out of nowhere with no explanation or logical reason for its setup. However, the story is engaging so this small quibble is unlikely to affect any enjoyment. The only other compliant would be that the ending felt forced and rushed, almost an attempt to wrap up big changes in a happy for now ending. However, knowing there are more books to come staring these characters mollifies any disappointment the ending may have caused.

Another well-researched aspect to the story is the setting of Guam. Many settings for action/adventure tend to be either exotic or a typical city setting without much character and flavor to the actual place. Here, the island of Guam is integral to the story and adds detail and texture to the story. The interesting and unique destination is not mentioned for something as stereotypical as drugs but for more mundane reasons and the actual crimes are those attributed to crime bosses everywhere. This helps create a believable setting, rich in detail that definitely adds to the book’s appeal.

Overall this is a great story with fascinating characters and well-written action. There is no fear of dirty, bloody, dire consequences and the story is not afraid to put everyone in danger, which keeps the reader guessing at what might happen while taking away the safety net of immediate rescue. The dramatic tension is well crafted and keeps you fully engaged in the adventure unfolding. This fresh new voice will captivate you from the very beginning and take you on a breathtaking ride from one scene to the next. You won’t want to miss this ride.

7 thoughts on “Throwback..whatever day of the week it is”