There are a lot of books out right now that have rape as an integral element to the story. Some are rape fantasy where the rape is violent and graphic. It may or may not lead anywhere, it could simply be to reinforce an alternate universe where these things happen frequently. It could also be a way to create tension and later resolution. Many have suggested it’s the hurt/comfort trope from fan fiction finding its way into books. 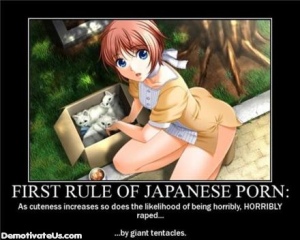 There are too many reasons to count for why authors include rape in books from literature to horror to romance. I think it’s up to an author to decide if the rape belongs in the book and then up to readers to decide if they agree and like it or hate it. Everyone has different tastes and fantasies and hot buttons so there’s no question rape in any form is bound to be a polarizing element in books.

What gets me though is the rather mild warning of “forced sex.” Now of course I know what this means but I wonder why publishers use a mild term when they are speaking of rape. Is rape such a horrible word that it’s ok to use the action in the book for dynamic effect but we can’t warn anyone about it?

In the gaming group I play with there was someone that hated the word rape. We of course used it all the time. “That boss raped us!” “That monster raped your ass.” “I got raped at the auction house.” In deference to the player’s feelings the guys started calling it “surprise sex.” The context didn’t change and the usage if anything went up, but somehow calling it by something else made the term less objectionable.

I think using the term “forced sex” is somehow less objectionable and less true. If the story is going to rape someone for whatever reason, I think the warning should say rape. Not forced sex. Rape. Call it what it is.